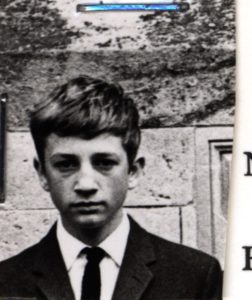 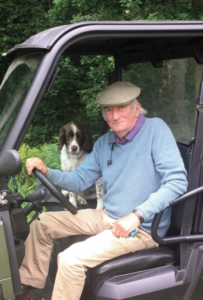 The following has been taken from the address given by Lieutenant Commander Matt Jennings RN (Ret.) at Tim’s funeral.

Tim was the second child of four, born in May 1954 to Phillip and Jane Zorab in the post-war London that was still dotted by bomb sites from the Blitz. Phillip and Jane set up home in a rented flat in Trinity Church Square in East London close to Guy’s Hospital. Phillip was to become an eminent physician and they brought up their four children, Mark, Tim, James and Marian in a very happy home. Tim always rejoiced that he had been born within the sound of Bow Bells which made him a true cockney!

Tim went firstly to Westminster Under School and on to St Paul’s because, as I am reliably informed, he was the brightest of the four children by far! However, things didn’t go too well at first as he set fire to the school while using sunlight to burn his initials into the rafters of a school building with a magnifying glass and was subsequently expelled. His parents were definitely not amused and he was moved to join his older brother Mark at Cheltenham College on the strict understanding that he would agree to become a reformed character. I will leave it to you to decide whether that worked out or not.

Tim was acutely aware that he followed in a long line of Zorab medics, four generations of them. Tim always had an interest in medicine and worked in a hospital during school holidays before deciding to pursue dentistry, qualifying at University College London.

Tim was not just an exceptional dentist but a highly skilled dental surgeon whose patients very much appreciated his care and attention and his ability to explain complex medical issues clearly. He was particularly sympathetic to nervous patients and always took great care to ensure that pain was avoided. He also really enjoyed teaching student dentists and mentoring those who were new to the profession. In recent years, Tim also derived great satisfaction from looking after the residents of old people’s homes. He was a keen proponent of the bartering system; dental treatment was exchanged for all sorts of goods and services, which I suspect drove his practice managers crazy.

His connection with Cornwall remained strong throughout his life. He met Annette when she was working at the Ferryboat Inn at Helford Passage and they married when he was serving as a Captain in the Royal Army Dental Corps based in Colchester. After leaving the Army he worked in Falmouth before setting up his own practice in Constantine, close to his beloved Helford River, where his parents and family had taken summer holidays every year.

He loved his sailing and invariably picked wooden boats, which inevitably involved a lot of work. He sailed across the channel for holidays with his family in France for many years, and it seemed to me that he always most enjoyed the crossings in really dirty weather; Annette often sensibly took the ferry.

Tim also loved fishing, particularly for salmon and trout in fresh water and pretty much anything at sea, though mackerel was a particular favourite. He was a very keen shot and was rarely without a spaniel at his side. A keen pilot, he took the family to Florida so that he could build hours to qualify for a commercial pilot’s licence and he thoroughly enjoyed flying light aircraft. He was also a very knowledgeable gardener and enjoyed the horse racing scene at Chepstow.

Tim cared deeply for his family and was very proud of sons Luke and Charlie and his grandchildren Hugo and Lillia. I had the pleasure of being a close friend of Tim’s for over 30 years and we shared many interests. My children regarded him as an ‘honorary uncle’ and he was very generous with his time and salient advice. Like all of us here, I shall miss him greatly: the world will be a poorer and duller place without him.