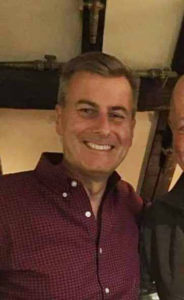 The following tribute has been written by Peter’s friend Mark Ridley (Cheltondale, 1980).

It is with a very heavy heart that I update fellow OC’s on the very sad loss of Peter, who died peacefully with his family around him on 1 December 2021, in Wellington, New Zealand.

Peter (and I both) studied at Mostyn House Prep School before joining College together. Peter will be remembered by all his friends for his sense of fun, dry wit and his effortless ability to attract admiring looks from the girls at Cheltenham Ladies College.

Peter became a very good tennis player and pursued his passion for sailing by becoming a member of the Navy CCF.

He also had a great love of music, running a pirate radio station from his room in Cheltondale, as well as acting in a number of College comedy review plays.

From College, he went on to study tourism at Bristol Polytechnic, before entering the travel industry in London, where he proved to be immensely popular and successful. His desire for travel took him to Australia, where he worked for several years and met his future New Zealand wife, Annick, before returning with her to London.

The attraction of a life in New Zealand proved too much for Peter and Annick and they both returned to New Zealand in 1994, where they settled in Wellington and raised two sons, Daniel and Alexander. Peter continued his career in the international travel industry as a senior travel consultant.

His laid-back style, charm and humility, all values he embodied in his time at Cheltenham, meant that he made friends extremely easily and became a very respected part of the local community.

Their idyllic lifestyle was shattered by the news that Pete had developed cancer, which he fought with amazing strength and courage, making the most of every moment with his family and friends, as well as significant fundraising by undertaking charity runs for the New Zealand Gut Cancer Foundation.

During his illness, he remained resolute and continued regular contact with many OCs and friends and family from around the world. We will all miss him greatly.