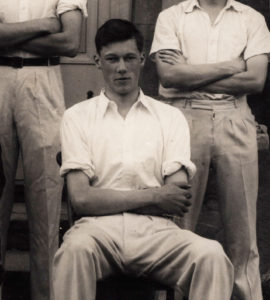 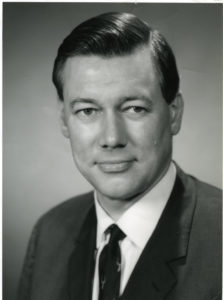 The following is taken from a tribute to Peter written by his niece, Deborah Cooper.

Peter was a born traveller; by the end of his life he had visited at least 119 countries. His father was a Commander in the Royal Indian Navy and his uncle was also in the Royal Indian Marine and 1st Commander of the Ceylon Naval Volunteer Force. Although born in London, Peter had been to Ceylon and India twice before attending his prep school in Eastbourne in 1938. The start of the war a year later instigated a lifelong interest in aeroplane spotting, not least after watching a German bomber fire its guns over the dormitory roof one night.

Peter had the same heightened sense of awareness of the war when he started at Cheltenham as a Day Boy in 1941. In his family memoirs he remembered arriving every day on his bicycle and wearing blue boiler suits over their clothing to save what they were wearing.

As for many, he found the college a centre of stability and happiness in uncertain times. He maintained fond memories of ‘senior’ staff members, some of whom had returned after retirement to help out after the younger ones had left to join up. Their experiences and anecdotes caught Peter’s imagination, embedding a long interest in military and aviation history. Not surprisingly he became extremely proud of the school’s heritage.

Sports became one of Peter’s great passions at Cheltenham, and the school provided many opportunities. He recounted in his memoirs, ‘I remember coming in third on the cross-country run to my friends Mark Webb and Barry Mackanes, who were both extremely fine athletes. I finished the race without any shoes because one of them had come off in the mud on Cleeve Hill, so I took the other one off to equal things up and completed the race in stockings.’

After his father died in India in 1942, arrangements were made for Peter to become a boarder. Academic study was not forgotten altogether, although wartime staffing led to variable results, and military skills were of course a key part of the curriculum. Peter joined the OTC (Officer’s Training Corp) but soon changed to the ATC (Air Training Corps) which he ‘found more interesting, added to which we did not have to polish our buttons, unlike the OTC.’ Peter was already proficient at aircraft recognition and was the first cadet in Gloucestershire to pass all the grades up to the first-class test.

Leaving Cheltenham in 1946, Peter went straight in to the RAF to do his national service. He spent much of his time in Ceylon, where he enjoyed the experience of working on the force’s radio station, Radio SEAC. Despite this highpoint, he never went into broadcasting or became a professional airman.

Peter returned to England and joined a manufacturing pharmaceutical company in London. In 1955 he entered into a competition sponsored by the Royal Society of Arts with an essay on market research. He won, and was given funding to go to West Africa to produce a report on exports to the area. This led to a long and successful career as an export representative for different European pharmaceutical companies, living and travelling first in Africa, then in Europe, and later in North America and the Far East.

In the 1970s Peter returned to the UK, settling in Ealing, to work in marketing. This never prevented him from setting off on his travels to pursue his many other enthusiasms which, apart from rugby and cricket, included deep sea fishing, butterfly spotting, animal conservation, stamp collecting, and anything to do with aviation and military history.

His experience and skill at market research was turned into historical research as retirement beckoned and he began to write learned articles on a wide range of topics including genealogy, Tudor history, Oriental ceramics, Shakespeare’s English and wartime aerodromes. A number of these were published in professional journals.

A man of many talents, he looked back to his time at Cheltenham with gratitude for the skills and breadth of interest it provided him all his life.

Peter is survived by his nieces Caroline and Deborah and nephew Charles, as well as three great nieces and nephews and their children.