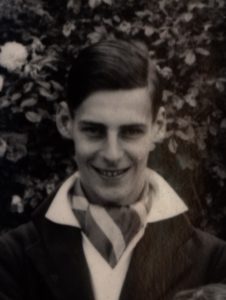 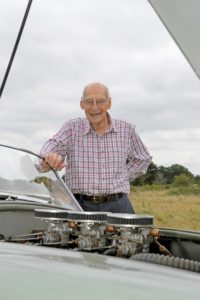 The following tribute was written by his son James. My father developed his natural skills in Mathematics, Sciences and Engineering at College. He also joined the CCF and Air Training Corps, setting him up for his National Service in the RAF in 1956, where he was stationed in England working on radar installations.

Later he went to Loughborough College where he gained advanced certificates in Pure and Applied Maths and Physics and went on to get an Honours Diploma in Mechanical Engineering.

He added to his impressive collection of qualifications in 1970 with an MSc in Industrial Administration at Aston University.

He had put my name on the waiting list for Cheltenham College from a very early age and I clearly remember the day, in September 1976, when he so proudly dropped me at Leconfield to follow in his footsteps. I was even taught by one of his teachers, Mr Calvert for History, unfortunately a subject that neither of us excelled in!

We enjoyed going to College together, walking through the Quad, visiting my Housemaster Mr Dodd, cheering College during a cricket or rugby game, or enjoying a service in Chapel. He loved going to the Christmas Carol Service, especially when joined by his family including his grandchildren.

A mechanical engineer and an entrepreneur at heart, he would make successful trips into various endeavours from being Managing Director for the family engineering business in the Black Country followed by his own business, through to the world of construction becoming a successful project manager and a claims consultant with challenging projects from the UK to Hong Kong.

In later years, he used his wealth of knowledge of the business world to play the stock market, taking great pleasure in many successful decisions.

Away from work he had many hobbies. He was active and adventurous, enjoying sailing, water-skiing, rowing and walking, and immersed himself in classical music throughout his life.

One of his greatest interests was in classic and historic cars with a remarkably comprehensive knowledge of the cars, their history, technical details and the people who owned them. His passion for motor sport generally, and hill climbs in particular, led him into marshalling especially at Prescott and Shelsley Walsh in the Midlands, driving there in his immaculate AC Ace Bristol. He loved his marshalling and winning Marshall of the Year award in 2017 was testament to his dedication and to the love and respect in which he was held by that community.

One of his motoring colleagues summed it up perfectly: ‘Michael was always the gentleman; he was smiling, cheerful and positive. He will be greatly missed but will not be forgotten.’

Michael is survived by his wife Mary, son James and daughters Lucinda and Sarah.