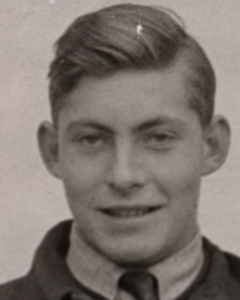 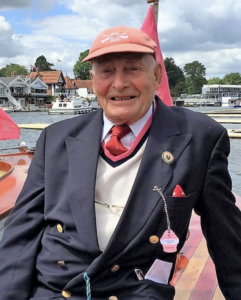 The following has been taken from a tribute written by Robert Treharne Jones.

John was born in Reigate, Surrey. Following Common Entrance in 1946, he was sent to Cheltenham College, where he learned to row.

Following two years’ National Service in 1951, John went up to read geography at Trinity College, Oxford, where the legendary Christopher Davidge was already making his mark as stroke of the Blue Boat.

John became Captain of the Boat Club at Trinity. Davidge also invited him to join the burgeoning group of future internationals at Barn Cottage, so John sculled all the way from Oxford to Henley, spending the single overnight stop on the grassy riverbank at Shillingford! During his time in Henley, John competed in the Head of the River Race.

In 1958, John joined Spencers of Melksham, an engineering business developed and chaired by his father, Sir Eric Millbourn, and he was sent out to South Africa. Whilst in South Africa, John and his first wife Sue welcomed the arrival of twins, Anna and David.

Back in the UK, he spent the next eight years at the company’s UK base in Wiltshire. During this time, John and Sue had a second daughter, Katie. But his heart was never really in the business, so a one-year teaching attachment at Monkton Combe kindled his interest, and his friend Desmond Hill suggested that he change careers.

Desmond had founded the National Schools Regatta some twenty years earlier, and John was involved in various aspects of the administration, including time on the committee, throughout his life. John also umpired at the regatta on many occasions and was one of the first in the country to get a multi-lane qualification following the regatta’s move to Holme Pierrepont in 1973.

In 1969, John was back at Trinity to get his Dip. Ed. and, more importantly, to coach the college’s first eight. Thereafter, he moved to London and married his second wife Patricia.

After a brief stint at St Paul’s School, he moved to Emanuel School, where he would spend the next five years, teaching geography and coaching rowing, including one eight which included a set of triplets!

In 1974, it was time for another move, this time to City of London School, which was high on academic achievement but less sporty. John kept the rowing going singlehanded – the school had a bay at London RC, but despite overseas trips to the Head of the Amstel, and to Israel, the sport at the school folded completely after John retired in 1993.

At Henley Royal Regatta, John was one of the very first Chairman’s Assistants to be appointed by Regatta Chairman John Garton. With all the authority of Stewards, but less of the kudos, these men (then) were appointed to take on tasks that the Stewards could not, either because they were too few in number or because they lacked the necessary skills. John spent many years in that role, mainly as an Aligner or Finish Judge, from which vantage point he was able to cast a critical eye over the competing crews.

For some forty years, John’s retreat was the farm he bought at Ashmore on the Wiltshire/Dorset border, where he would involve himself in the local community and take a real interest in the farming and country life. But the results of a serious car accident some eight years ago, and the death of his fourth wife, Maggie, unsettled this rural idyll, so earlier this year he made the difficult decision to move to Henley, to be nearer his family, and the epicentre of the sport which had been such a major part of his life. It was unfortunate that the physical and psychological effects of such a move unsettled him further, and when elective surgery proved necessary the post-op complications dealt a final blow.

John is survived by his three children, Anna, David and Katie, his six grandchildren, and by his sister Suzi and niece and nephews in South Africa.