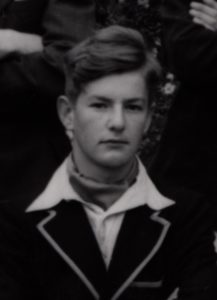 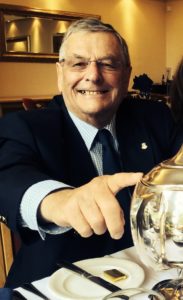 Ian McFarlane died on 23 December, aged 93. A passion for ships led him to a successful entrance examination at the age of 13 for Dartmouth Naval College. However, his restricted eyesight prevented him from joining and he came to College.

In 1949, aged 21, he joined the newly formed Regent Oil Company as a trainee retail sales representative and over the next 13 years expanded the ‘Regent Roundel’ market in the Midlands area.

Success in this field led to several promotions, taking posts in Belfast and Glasgow, before he transferred back to the Midlands in 1978, settling with his family in Stratford-upon-Avon.

In his new role as communications representative for Texaco, who had taken over Regent in 1969, Ian worked on a number of projects including the introduction of mobile phones for all field and non-office staff – this was seen as an industry-leading step.

On taking voluntary redundancy in 1987, Ian became a contractor for Texaco, organising sales conferences and later working in the public affairs department organising corporate sponsorship, including the launch of the Texaco Trophy for his beloved game of cricket.

Ian was very involved in Stratford-upon-Avon. He gave seven years unstinting support to the Stratford-upon-Avon Sea Cadets, including being President, and was Director of St John Ambulance in Warwickshire. In 1996 he became the first male consort for 60 years when his wife Joan was appointed the town Mayor.

One of Ian’s most enduring legacies is the Shakespeare Marathon, which he founded when he was president of the Rotary Club and which now supports more than 40 charities.

Ian is survived by his daughters Anthea, Sheena and Joanna, and his grandchildren