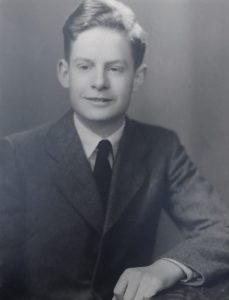 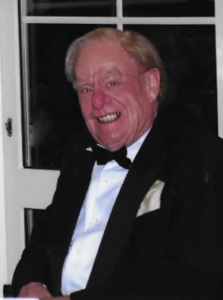 Thump! Thump! The sound of a brace of pheasants hitting his desk at Christmas, a present from a grateful farmer, was all part of the rich tapestry of life for Moreton Stranks when he started his accountancy practice in an Oxfordshire market town in the early 1960s.

On leaving College in 1948 he took what would now be described as an extended gap year. In his words he ‘got rather distracted’ by developing a love of motorbikes, Austin Healey sports cars and ‘gallivanting with his friends.’ At the same time, he learned the benefit of hard physical work by labouring at a local seed mill where in just two months he lost two stone in weight.

While completing his National Service, Moreton came under the watchful eye of the intimidating Regimental Sergeant Major Ronald Brittain MBE (later to feature in many films during the 1950s and 1960s). One day when presenting arms, Moreton over-enthusiastically smashed his rifle sight into his face and broke his front teeth. RSM Brittain was apoplectic and put him in the Guard Room for three hours. No medical attention and blood everywhere.

Despite this transgression, on 21 June 1951 Moreton passed out as 2nd Lieutenant HM Stranks, Corps of Royal Engineers. After 14 months and with notice of his father’s terminal illness, he applied for leave on compassionate grounds and left the Army, returning to Banbury to help with the family hotel business.

After a short time, he joined the firm of Thornton & Thornton and began training to become an accountant. This did not stop him throwing himself into the social life of the town. He was actively involved in the rugby club, both as a player and organiser of spectacular fetes with ox roasts and the Band of the Royal Marines marching through the town; dances at the Conservative Club; playing tennis; following in his father’s footsteps at the masonic lodge; and of course indulging in his love of sports cars.

After qualifying as an accountant he went into a partnership and started Ellacott Stranks & Co, Chartered Accountants.

In the early 1960s Banbury still looked and smelt like a market town, boasting the largest live cattle market in Europe. It was not uncommon to see cattle being herded through the streets on market days and the town still had its own brewery. This combination created a delightful smell of fresh cow pats and hops. But farming was changing rapidly.

Farmers were paying huge amounts of money for expensive new tractors and equipment but were driving themselves around in rusty old cars.

The timing was propitious for a bright young accountant who knew the area well and understood local famers’ needs. After all Moreton had played rugby with many of them.

An increasing number of farmers and businesses asked him to look after their financial affairs. And as he said, ‘things took off a bit,’ the firm eventually growing to over one hundred staff. He maintained his close connection to the local farming community, sponsoring the fat stock steer section at the cattle market and always enjoyed catching up with clients at the Christmas market. His older clients continued to thank him with the odd brace of pheasants at that time of year.

In 1964, Moreton married Gloria Hyde. They renovated an old bakery in Bloxham, just three and a half miles from his office in Banbury. There they raised two daughters, Vanessa and Catherine, and enjoyed family holidays in the Caribbean, Europe and the Near East. Although on these trips Moreton was often seen to enjoy the challenges of the Daily Telegraph crossword puzzle more than the glories of ancient monuments. Vanessa and Catherine went on to follow in their mother’s footsteps and trained as nurses.

Even as his accountancy practice grew, he found time to be involved in local community groups and became president of the local branch of the Lions Club. He also became a passionate golfer at Tadmarton Heath Golf Club, one of the most attractive short courses in the country. He served as president, company secretary and captain of the club and joined club tours to Spain, Portugal, Florida and Scotland. During his captaincy he achieved his goal of playing with every member of the club over the course of one year.

Sadly, Moreton and Gloria’s marriage did not last, but he carried on living at the Old Bakery in Bloxham and remained close to his daughters for the rest of his life.

In retirement he continued to pursue his passion for golf at Tadmarton Heath until ill-health in his eighties confined him to the clubhouse.

One of his other, unlikely, passions was making marmalade every January. His skill was of such a high standard that it was recognised one year when a friend slipped a jar into a competition at Milcombe Village Fete and Moreton carried off first prize.

Moreton died at his home in Bloxham, where his daughters nursed him in his last months.

His funeral took place at St Mary’s Church, Bloxham on 11 December 2021. He had requested that bagpipes be played at the service and he be buried to the sound of a bugler playing the Last Post. His love of military music, first kindled as a drummer in Corps of Drums at College, stayed with him to the end.