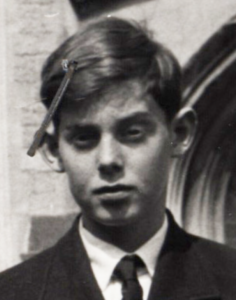 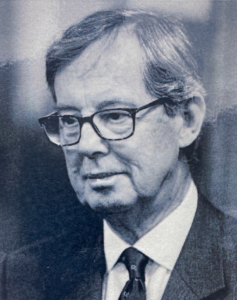 Paul was in the cricket XXII in 1962 and also played for the House XI which won House Pots, scoring a century after Boyne House had been 50-5 in the semi final game. He played in the 2nd XI hockey in 1962. He was in the Corps of Drums and was awarded his silver drumsticks. In his 1961 end of term report the HM said, ‘He is very much the sort of person we would like to send to Sandhurst.’

Paul was appointed a Trustee of the Cheltonian Endowment Trust (CET) in 2005, elected Chairman in 2009 and resigned as a Trustee in May 2021. During his leadership the CET has supported College financially through bursaries to pupils whose parents have hit hard times and who otherwise would have had to leave College, travel scholarships for the Lower Sixth pupils and Speech Day Prizes for the Upper Sixth, and has bought property which is leased to College for staff accommodation.

Paul, who was a second equerry to Prince Edward, Earl of Wessex, brought Prince Edward to College and the Junior in 2012 to celebrate the 150th anniversary of the CCF and to recognise those Old Cheltonians who have served their country. The Prince also attended Chapel for the dedication of the College Memorial by the Bishop of Rochester, the Right Reverend James Langstaff (L, 1973). The memorial was then moved to the National Memorial Arboretum at Alrewas.

The following is an abridged version of the tribute paid to Paul by General Jack Deverill KCB OBE DL.

I am here to talk about Paul the soldier.

I first came across Paul at Sandhurst. With a name like Arengo-Jones it was difficult not to be noticed but I can’t claim to have known him. Even though we were both in the infantry, he like his father before him in the Gloucestershire Regiment, and I in the Somerset and Cornwall Light Infantry (how sad those old names have long gone), our paths didn’t cross until 1977 in Northern Ireland.

Paul’s early career was similar to most infantry officers except for two episodes. He completed an attachment with the Royal Marines. To do so he had to pass the commando course which is certainly tough and demands high levels of physical and mental resilience.

He wore his commando dagger with pride and affection. Then in 1972 he participated with John Blashford Snell and others in an expedition to cross the Darian Gap between Panama and Columbia.

Paul played a crucial role on the expedition which Snell said was the toughest thing that he ever did. It is the 50th anniversary this year. Paul demonstrated that he had a flair for fixing problems. The physical challenges set by the terrain, the climate and the jungle were legion and Paul played a crucial role in ‘keeping the show on the road,’ though that was the problem because generally there wasn’t one!

Paul loved to be given a problem, he relished the challenge and he was good at finding solutions. He was one of nature’s fixers. During the expedition he picked up the pseudonym of ‘Arrangement Jones’ because of his ability to find the right stuff and get it to the right place in working order. Luckily the name didn’t stick.

I first met Paul when I was a newly appointed Brigade Major, now referred to as a Chief of Staff, of HQ 3 Brigade which was the brigade that looked after most of the border between the North and South of Ireland. Paul was doing a similar job in HQNI and was the man with whom I did most of my business.

Bde HQ worked and frankly I was struggling. Thank heaven for Paul, firstly he understood how things worked, secondly he realised that I was finding life difficult, thirdly he was determined to help and lastly his was a kindly voice on the end of the phone and above all else that was what I needed because there weren’t many others around. It was at that time we first met Josephine, and Jane and I began a long-lasting family friendship.

This relationship was reprised five years later at Sandhurst when I was a Company Commander and Paul was a Chief Instructor.

The last time our paths crossed in the Army was when we both commanded our respective Battalions in Tidworth in the mid-1980s. Paul took over a Bn that had a reputation for being a little serious. This didn’t survive more than a couple of weeks of Paul’s grin. But there was more to Paul than just his grin. As Bishop John Kirkham said in his letter, Paul ‘had an easy manner and disarming honesty’ and wished to ‘obtain the very best from people whatever their background.’

He had a light touch and people enjoyed working for him. He led by example and by persuasion, of that there is no doubt. Because of this, he rarely had to use compulsion and he was absolutely ‘himself.’ You got what you saw, a kindly, humane, intelligent, light hearted, courteous soldier who understood all about hardship and privation, who had with Josephine the great gift of friendship. He was a person who recognised life’s challenges, knew that they could be surmounted and that life, whilst serious, had to be enjoyed. There had to be fun. No fun, no grin. Above all, he was a man who embodied the Sandhurst motto, more an exhortation really, of‘Serve to Lead.’What so many leaders fail to grasp is that the leader is above all else the servant of those he or she leads. Paul instinctively understood that and it was evident in everything he did.

Paul ended his military career with a highly successful period with the International Staff in Berlin and he and Josephine were there during that momentous time in 1989 when the Berlin Wall was dismantled. Working in an international environment is always a challenge when English is the working language. So many of the nuances that we native English speakers pick up are not so self-evident to non-native speakers. This can constitute something of a minefield, but Paul’s personal attributes came to the fore and the many lasting friendships that were forged during this time are testament to that.

One of his more testing moments was when he masterminded the closure of Checkpoint Charlie. The last Soviet Minister of Foreign Affairs Eduard Shevardnadze chose to approach the checkpoint from a direction that was not the one that Paul had arranged. There was something of a stand-off which threatened the accord that was intended to be created by the event until Paul mentioned to Shevardnadze’s staff that if the minister didn’t approach from the direction he had been asked then his arrival would be unseen by the world’s press and TV. That did the trick.

Paul left the Army in 1992 and forged a new and highly successful career as Secretary General of the International Award Association of DoE Award, under the Patronage of HRH the Earl of Wessex. This was precisely the sort of appointment that was going to demand and make best use of Paul’s considerable organisational and human qualities. Paul’s life was devoted to service as evidenced by his support for many charitable and non-profit organisations such as Haven and the Church. He was devoted to his family.

He was someone who achieved much during his life and through his actions made the lives of many other people much better. He will be greatly missed. He was the epitome of Chaucer’s ‘gentle perfect Knight’ and I was privileged to have him as a friend.