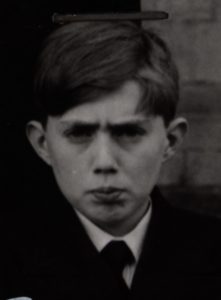 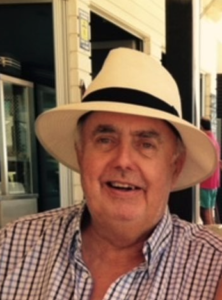 The following tribute was written by his son Julian.

Chris spent his childhood living with his grandparents and mother on Montpellier Spa Road. He often referred to Montpellier Gardens as ‘his’ garden and told stories of helping the groundsmen to put out the chairs around the Bandstand.

During his time at College, Chris formed many friendships that lasted for the rest of his life. Academia was not his strong point, however ‘dealing’ was. Once he had spotted that his father never checked his account, he duly organised himself as the House quartermaster by providing the other boys with any sporting equipment they needed from Woof’s. He would be paid cash in return. It was his ability to spot opportunities like this that lead to his successful career in estate agency and in antiques. He was a partner in Cheltenham at Lear & Lear and a regional director of Hamptons, Cheltenham.

He also proved himself a very able sportsman at College. He played both in the Colts rugby and hockey teams and played in the 1st XI hockey team. He also played five games for the rugby 1st XV and scored a try but was inexplicably dropped!

Having finished school he moved to London, where his father was based, and for a short time he trained as a surveyor. However, on a trip back to Cheltenham in 1962 he met Julie who he went on to marry and they returned to Cheltenham to start a family.

Chris loved visiting Salcombe in Devon, having gone there since he was a child. During the 1980s he bought a house, had several boats and then bought a fleet of houseboats. He fancied himself a sailor and often terrified the family taking them out to sea!! But all would be ok as long as he was wearing his captain’s hat.

In 1989 Chris purchased a house in Portugal following the sale of the estate agency and it was not long before he based himself mainly in Portugal. He threw himself into life there, learned the language (or at least his version of the language) and formed some great friendships with locals and other ex-pats.

Chris was a larger-than-life character, a true and loyal friend who was always ready to help anyone in need and he will never be forgotten.

Chris is survived by his long-term partner, Helen, his daughter Lucy, his two sons Adrian and Julian and his six grandchildren.