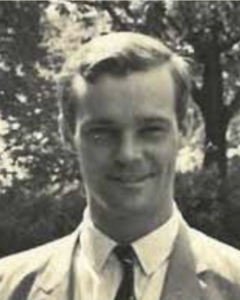 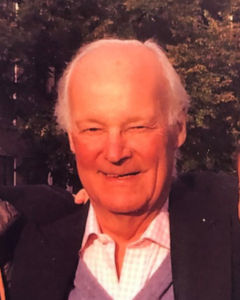 Kit was born in India, where his father was on secondment to the Indian Political Service, on 3 October 1939. He and his family returned to England in 1944 whereupon Kit was sent to College.

Kit captained the Colts XV in 1955, winning five games, losing one. He was outstanding at this level. Prior to the first 1st XV school match in 1957, Kit damaged a cartilage which was to keep him out of the game for the rest of the season. This was very unfortunate as he was the natural choice for the 1st XV fly-half position as he was one of the best backs in College at that time. He was made the official 1st XV touch judge for all matches that season so that he could feel part of the action. He was also invited to all the 10-year celebrations of their unbeaten year, held at College, and superbly organised by the team captain Jeremy Taylor (Xt, 1957).

On leaving College, he went to Sandhurst in 1957 and was commissioned into the 10th Princess Mary’s Own Gurkha Rifles (10 GR) in 1959. In 1960 he was posted to Hong Kong and joined the 2nd Battalion (2/10GR) Norwegian Farm Camp, just after the battalion had arrived from Malaya. He had successfully completed the Infantry Platoon Commander’s Course, the Gurkhali language course and the Jungle Warfare course and was promoted to Lieutenant in December 1962. He was part of the force which played a part in quelling the Brunei Rebellion.

This was quickly followed by hostilities across North Borneo in what became known as the Indonesian Confrontation or the Borneo Campaign. His postings included three operational tours to Borneo, first as Intelligence Officer and then as Company Commander.

Towards the end of the war, in November 1965, Kit was in command of the 2/10 GR in an attack on an Indonesian base near the border town of Serikin in Sarawak, north west Borneo. The action was one of the British Army’s most ferocious since the Korean War, unmatched until the Falklands conflict. Lance Corporal Rambahadur Limbu was awarded the Victoria Cross for his outstanding personal bravery.

Astonishing though Rambahadur’s actions were, the battle was far from over once the enemy position had been taken. Evacuating the company’s casualties, three dead and two wounded, meant Kit had to keep the Company on the enemy position for longer than was ideal. They beat off three counter-attacks before the Indonesians began to retaliate vigorously. With artillery support, Kit held their position until he received radio confirmation that his casualties were all safe. Kit was awarded an MC for his bravery and leadership. The citation said his courage and disregard for danger, facing heavy enemy fire at a distance never exceeding a few yards, was the deciding factor in a most remarkable and successful feat of arms.

Kit was appointed Adjutant at the end of the Borneo campaign when the Brigade of Gurkhas was being run down. Shortly after the 1st and 2nd Battalions of the Regiment amalgamated in 1968, Kit elected to leave the Army, having risen to the rank of Major (at the time he was the youngest Major in the British Army).

He later attended Cranfield Business School before spending 15 years in the clothing industry in Hong Kong, followed by 15 more in catering, with directorships in publicly quoted and private companies, and was a mentor with the Prince’s Trust. He served as a regimental trustee for many years and chairman of the investment sub-committee, raising additional funds for 10 GR’s pensioners and making a substantial personal donation to allow the painting by Terence Cuneo of Rambahadur Limbu’s VC action to be gifted to the Gurkha Museum in Winchester.

He is survived by his beloved wife Caroline, his daughters Venetia, Chloe and Skye, and his six grandchildren.