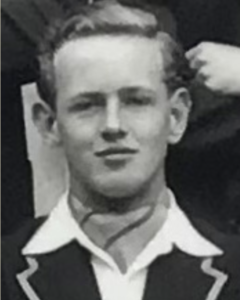 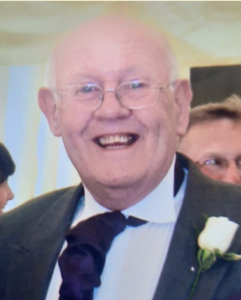 Brian was very talented at sport. He was awarded his Cricket Colours in 1956 and played for College in the annual cricket match at Lord’s Cricket Ground vs Haileybury in 1956 and 1957. The match in 1956 was ruined by rain but, in 1957, College won with Brian scoring 31 runs and taking 5 wickets for 71 over Haileybury’s two innings. Also in 1957, captaining the Newick House team which won the 1st XI Pots that year, he scored 100 runs and took five wickets in one knockout round before Newick House beat Boyne House in the final. Brian was an energetic fast bowler who seemed to be able to bowl extremely fast all day. He was a lower order batsman who thrived on hitting the ball hard and he tried to score off every ball bowled to him. He was also an excellent fielder.

Brian played at full back in Jeremy Taylor’s (Xt, 1958) unbeaten rugby 1st XV in 1957. He was a brave tackler who defended very well and was also a good kicker of the ball. His most endearing feature however was his willingness and his ability to turn defence into attack at every opportunity. On many a time, he came into the three quarter line to press home an advantage.

Brian was in the College athletics team in 1957 throwing the discus. He also won the College rugby fives championship with Neal King (NH, 1957) in 1957.

Brian, born in Bramhall, Cheshire, was the eldest of three boys whose parents owned a successful retail confectionery business in South Manchester. He went to Ramillies Hall School in Cheadle Hulme, Cheshire in 1947, coincidentally with me, and we both went on to enter Newick House in 1953, the Coronation year of Queen Elizabeth II. Brian was a popular boy and became a House Prefect then a College Prefect. He was the first to acknowledge his academic achievements did not match his sporting talents!

After leaving College in 1957, Brian opted initially not to join the family confectionary business but he started a chain of greetings cards outlets in South Manchester.

His enjoyment of sport continued with a long trial with Lancashire County Cricket Club where he played for the 2nd XI on several occasions but unfortunately did not meet the grade for 1st XI county cricket. Brian also played in the winter for Wilmslow Rugby Club in Cheshire which, in the days of pre-professional rugby, was a top club in North West England. He is remembered to this day by Wilmslow colleagues for his fearless tackling and adventurous style of play.

In the 1960s Brian joined the family confectionary business which continued to run a number of outlets in South Manchester for several years.

Brian married his wife Dorothy in 1969. They had two children, Cliff and Anita. In 1973, Brian and Dorothy bought a farm between Stockport and the Pennine Hills. Their mainstay was rearing sheep and beef cattle. Brian also formed a company to sell the farm’s hay and straw to other farmers. In 2011, his son Cliff married Vicky at the farm. They now have two children Darcy and Sebastian.

Unfortunately, Brian’s health began to deteriorate 10 years ago so that he was unable to continue attending the unbeaten 1957 Rugby team’s reunions at College every 10 years (now every five years), which he always enjoyed.

He is survived by his wife Dorothy and by his son Cliff (who is taking over the management of the farm), daughter Anita and grandchildren Darcy and Sebastian.